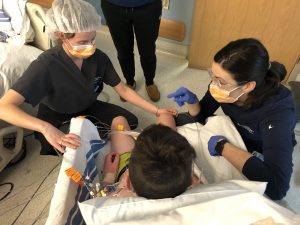 Asher had a much better day! A chest tube was removed, he was able to get out of bed to a chair, his pain seemed mostly tolerable and his blood pressures have been mostly stable while beginning to wean off some infusions. The really important things are to maintain his blood pressures at a happy medium, high enough to fully perfuse all organs but low enough to avoid damaging the surgical work, all while trying to rid the body of extra fluid from the surgery, while again not ridding it of too much as he does after all only have half a heart which is happiest when fairly full of fluid. So all that said, it’s a balance. The other really important thing is to monitor bleeding from the chest and any fluid or air collections that occur. Finally, he is generally prone to arrhythmia but especially after a major surgery like this.

I pray tomorrow his other chest tube can be removed as they are very uncomfortable. Imagine a tube half an inch in diameter about a foot inside your chest. It’s pretty cruddy but necessary for drainage post operatively. Asher has continued to do all things asked of him, not always happily but that’s expected. He has no idea how much of a fighter he truly is.

7 thoughts on “Better Days are Coming”